In Shayne McQuire’s The Silver Bull Market, he highlighted four important factors to consider before buying silver or gold:

1) Investment safety refers to your capital protection from the financial market risks. Most people always lament that owning silver or gold bullion does not provide dividend incomes. However, they don’t realize that precious metals allows you to remove wealth from the financial system. This is because gold and silver have historically been used as store of wealth and gold in particular, is seen as an effective tool to beat inflation. Take the current Euro crisis as an example. Greece is facing possible exit from the Euro because of its massive national debts. The country had been previously bailed out with a $275 billion international loan and is now asking for fresh fund of $10 billion euros in short term financing. Clearly, the country’s plight shows that the Europe economies are not doing well and holding on to the Euro currency might be risky as it could face possible devaluation if the crisis spreads across Europe.

2) Investment potential refers to the ability for the price of silver or gold to rise over the long term. It is interesting to note that while Warren Buffett disdains gold for its lack of utility, he views silver differently and even purchased 130 million ounces (at low price of $6) in the late 1990s, one fifth of the global production at the time.

Many finance bloggers like to quote Warren Buffett’s saying “price is what you pay; value is what you get”. However, knowing this is one thing, practicing it is another matter altogether which requires some level of deep analysis. The fact is that you can’t determine the intrinsic value of a company just by staring at the figures stated in the quarterly or annual financial statements. According to MorningStar’s “Why Moats Matter”, there are generally two approaches when it comes to valuation concepts.

How do investors identify great companies? One of the simple tools to value company is through using earnings yield, or more commonly known in the investment community as Price/Earning (P/E) ratio. This simple method requires only current share price divided by the last 12 month’s earning. Companies with high P/E ratio are considered growth stocks.

There are pros and cons in using P/E ratio to measure the value of a company. Whilst this metric is relatively easy to calculate, this approach might not be appropriate for companies whose profits swing significantly from year to year. This is especially for for high growth stocks and cyclical companies like the airlines and IT companies.

Another approach of measuring the intrinsic value of a company is to determine the discounted cash-flow, or DCF.

END_OF_DOCUMENT_TOKEN_TO_BE_REPLACED

According to data released by URA on 23 January 2015 for 4th Quarter 2014, the prices of private properties declined by 4% for the year of 2014 as a whole, compared to an increase of 1.1% in 2013. The report also highlighted that there were price decrease across all segments of the private residential property market, including the central region, which seen drop of 0.9%. The current market trend is in line with what most analysts predicted last year and the market mood is expected to continue to be sour moving forward. With the slew of cooling measures firmly in place, many property investors are still adopting a wait-and-see approach. Because of this, for the whole of last year, developers sold 7,316 units, a figure much lower than the 14,948 units sold in 2013. To make matter worse, if we include the 14,220 Executive Condominium (EC) units in the pipeline, there would be a total of 83,180 units in the pipeline. Also, based on the completion dates reported by developers, about 24,796 units (including ECs) will be completed this year and another 25,717 units (including ECs) are expected to be completed in 2016. Clearly, the data indicated that the supply is outstripping the market demand since 2010 as reflected below.

Ignorance is one of the main reasons why investors consistently lose monies when it comes to investing because the biggest risk comes from not knowing what you are doing. The second factor is greed, which causes investors to lose sight of the risks involved in alternative or exotic investments. In the pursuit for higher returns for their monies, those who are greedy overlook or underestimate the risks involved. Thirdly, arrogance is the ultimate downfall for those who don’t respect the market. Always remember the golden rule that you can never win the market consistently, so avoid leveraging your investments if you don’t have the holding power. Yes, leveraging can increase the profit margins, but it can also backfire and widen your losses when the market turn against you.

In early February 2015, news broke out that more than 250 Singaporeans lost an estimated $35 million in yet another flopped gold buy-back scheme operated by Suisse International. Unhappy investors gathered outside the police headquarter trying to lodge police reports to the Commercial Affairs Department (CAD). It was amazing that after so many widely reported cases of gold buy-back scams, Singaporeans still fell prey to such schemes. There were a few who even claimed to borrow a few hundred thousands from the banks to invest.

END_OF_DOCUMENT_TOKEN_TO_BE_REPLACED

Nowadays, I am extremely fed up with M1 network services. No matter where I go, the 3G network coverage is terribly poor for my mobile phone. As a result, sometimes I could not receive messages from my loved ones and friends.

I suspect the drop in the network quality may be because I cancelled M1 4G subscription recently – previously it was offered to me free-of-charge when I renewed my subscription plan but M1 stated that it would charge me $10 extra from January 2015 onward. If not for the fact that I have to pay hefty penalty for cancelling my subscription plan contract, I would have terminated my line long ago.

From the consumer’s point of view, if I am not satisfied with a company’s services or products, I would not invest in their shares. For a knowledge-driven economy, internet data access is critical in Singapore and if M1 is unable to provide reasonable network service level, it don’t deserve any investment merits. Notwithstanding the dividend track records, if M1 is unable to retain customers, its economic moat will only erode over the long run.

The saturated Singapore market and the fierce competition among the three telecommunication companies (SingTel, M1 and Starhub) reinforce the importance of economic moats in this sector.

Gold Bars with No Spread!

The gold bars are minted by the Swiss LBMA accredited refinery Argor-Heraeus for BullionStar with the text “Money since 4000 B.C.” on reverse indicating that gold has been money for some 6000 years.

When you buy 10 or more of these gold bars there’s no spread between the buy and sell price whatsoever. For purchases of less than 10 bars, there’s a small spread of 0.6 % which is still significantly less than normal for 100 gram bars. 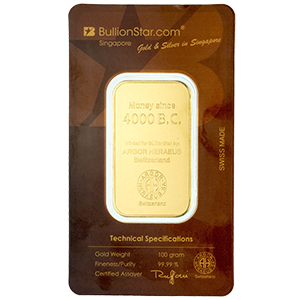 The gold bars are minted by the renowned Swiss refinery Argor-Heraeus and comes sealed in a tamper-proof Certicard blister package.

According to today’s Property Guru’s news article, 400 Singapore investors are suing Ecohouse for investment losses of up to $70 million. Apparently, the company had an office in Suntec Tower and managed to attract many first time retail investors hoping to make money from overseas property investments. Investors were sold investment schemes that promised to deliver “20% in 12-months on its S$46,000 social housing property investments”.

To put things into perspective, many of these Singapore investors are not your typical mom-and-pop types of investors who are uneducated and ignorant. Most of the victims are middle-class people with high incomes seeking to enhance their wealth through schemes that promise high returns within a short time frame. Usually the scheme involves pooling of investors funds and the money is typically managed solely by the operator. The first principle that investors should always bear in mind is that if something is too good to be true, it is! Retail investors should first of all check whether these schemes are regulated, instead of just focusing on the rate of returns.

Ecohouse managed to sell more than 1000 of their investment schemes in Singapore and other South East Asian countries in 2012 and 2013. That was the period when the property market was in blistering red hot form in Singapore and also coincided with the slew of cooling measures implemented by the government.